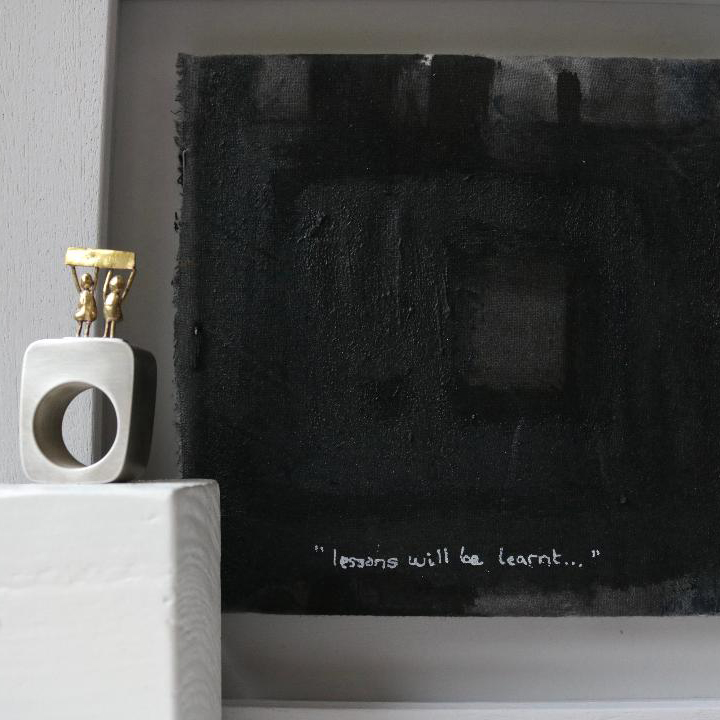 Emily Smith and I have come together to work on an exhibition of work under the title of Humanity. We pre viewed our first show at The Colour Factory in August 2022.

A contemporary artist, and contemporary jeweller coming together to voice the importance of humanity, by bringing social awareness into Southern England’s contemporary creative scene.

The work focuses on various social issues, near and far. Whilst these topics may have left front page news, they’re not “done”.
All pieces intend to encapsulate just a small fraction of the phenomenal capacity for hope that a human has. Whether that be for something small in an individual life, for societal change or for a better life after unimaginable dangers.

Making Art Your Voice: In response to the tragic way so many vulnerable people fly under the radar, Rosie has created a series of relief paintings that capture resilience, and hope, even in the smallest of corners. The project started in 2007 with her “What becomes of the dreams of children?” piece, and it gained momentum when the already deprived community suffered the Grenfell Tower fire. Rosie returned to the community where she taught and raised her children, to arm the new generation with a visual voice in sketchbook skills. She has donated her time teaching since 2017 at Oxford Gardens Primary School.

Make Jewellery Not War: Emily originally started this collection in 2015 with a strong desire to ‘do something’ after news of the Syrian Refugee Crisis emerged. In the years following, her technical skills developed throughout university and she promised that she would return to the project. At the beginning of 2020, it had a new lease of life, motivated by an overwhelming array of different social issues. She produces a collection of little wearable sculptures that serve as a reminder to not only see the good in as much as possible, but also to be it. 10% of sales go to Medecins Sans Frontieres.

You may not be a leader, doctor, or feel like you can make an impact but there’s always a way to use the skills that you do have to help make this world a better place. People often think they don’t make a difference, but everyone has the capacity to contribute something, even something small.